The last class with Henry was great!

He told us about Halloween.We learned a lot!

Origin: Hallowen was born in Ireland but people says it was born in U.S.A because one million Irish migrated to U.S.A. in the 19th century.

We got surprised about its origin,  it has Celtic origin, it comes from the Celtic holiday of Samhaic. Later,the church converted it in All Hallows day which means All Saints.

Then we talked about Halloween's costumes. Children go to the house dressing up as Dracula, ghosts... the adults dress up as Spiderman, Batman, Superman...

They have some typical games of there. They make a party with friends and family. In his town,  there is a legend,  it says that in the night of 31 October if you don't pour Holly water in your potatoes crop fields,  the dead people pick up the potatoes and put eggs there. In his town there is a castle and another legend says that the owner of the castle  buried a treasure before he was killed.

We are glad they enjoy their parties but we have another one: All Saints!!

Last week, we met our lecture, Henry, he is Irish and he is a nice guy.

We have had a lot of fun, he spoke to us about Ireland and himself and also we tried to learn the Irish dance. It was good but is was difficult.

His country is very beautiful. His flag is divided into three parts: green (Catholics), white (peace), and orange (Protestants). And the Irish symbol is the harp. Harp is a melodic instrument.

In conclusion, Ireland is a beautiful country with nice traditions. And Henry is an interesting guy.

HENRY AND OUR CLASSES… 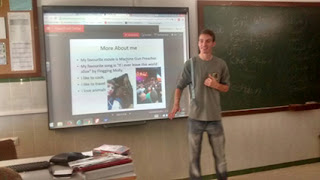 Our new teacher, Henry, has come to our school. He will be helping us in every possible way until June.


Henry is a native Irish younger. He is nineteen years old, and he lives in a small city called Ballyheigue.


Henry is a somewhat different teacher, but that makes him more special.


His hobbies include travelling, he loves playing rugby and, of course, animals. He has three pets: one dog, one cat and one donkey. But he dreams of having a kangaroo, because it is his favourite animal.

We like him because he is funny and he teaches us interesting curiosities about Ireland. He also taught us how to dance the Irish dance, that was the best!

Henry is a great teacher, with him you learn and you enjoy yourself at the same time.